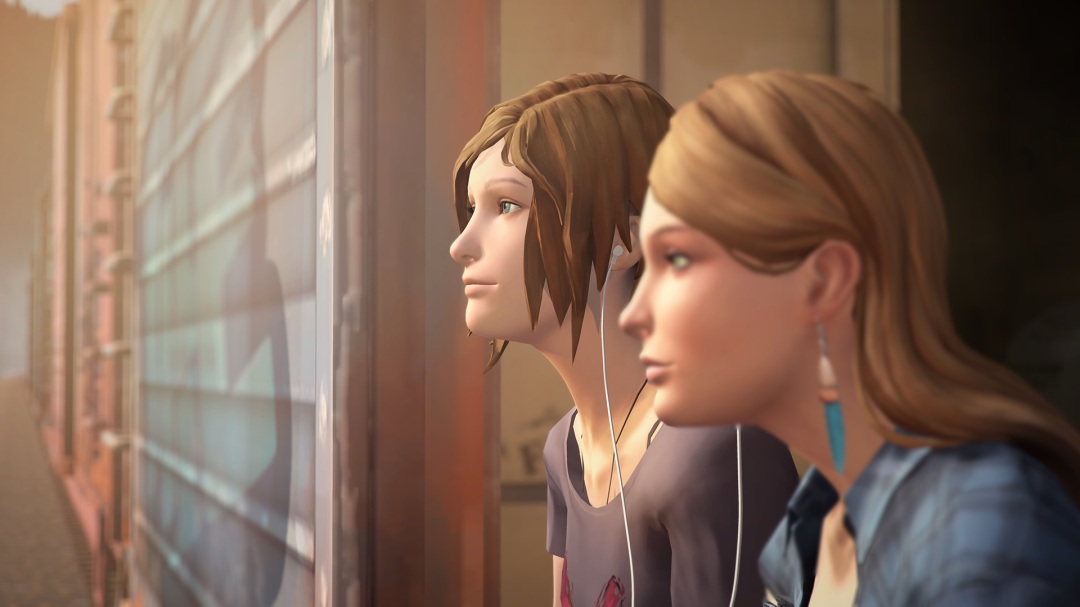 Review: Life Is Strange: Before The Storm Episode 1 – Awake

See “At A Glance” but exchange time travel and butterfly effects for heated verbal confrontations and more middle-fingers than a Steve Austin DVD.

Three years before the events of Life is Strange, players control a 16-year old Chloe Price. Chloe struggles with coming to terms with her father’s passing in a car accident two years earlier, choosing to lash out at the world instead.

I liked Chloe in Life is Strange, though her snarky and confrontational attitude irritated me at times. That’s on full blast here and it made for a rough go early on, to the point that I wondered if she was perhaps best presented in smaller doses. Chloe and I are polar opposites personality wise. One reason I liked Life is Strange was I identified greatly with Max, the goody two-shoes extraordinaire. Chloe can be a selfish, thoughtless, jerk. I understand why that is, but that didn’t prevent her from getting on my nerves. Her lame Bart Simpson shtick gets laid on pretty thick in the flat opening chapter. One eye-rolling example involves causing a t-shirt vendor’s car to fall of the edge of the warehouse for selling “overpriced” $20 shirts. 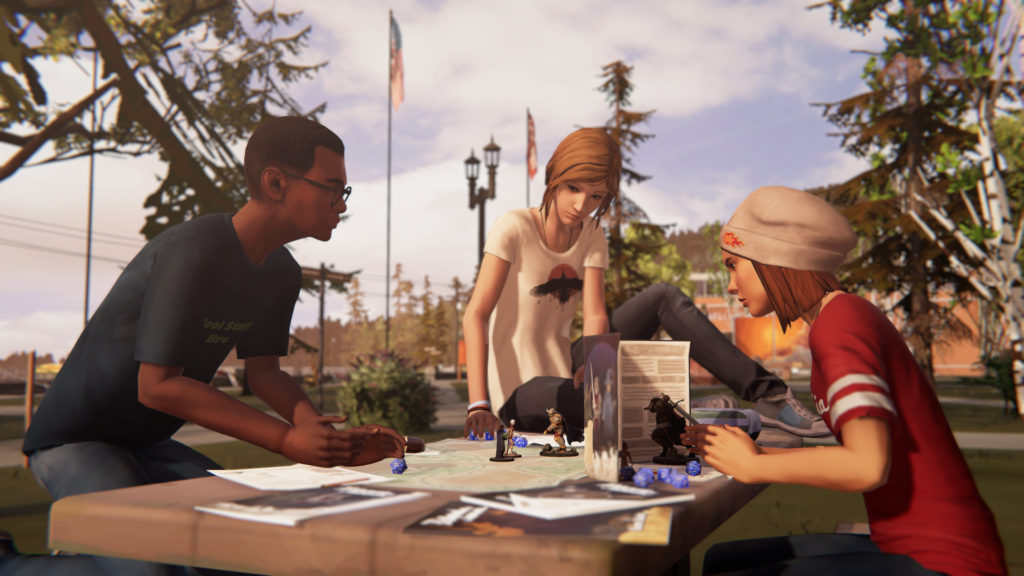 The game slow first half serves as a dull refresher and introduction (if you’re a newcomer) to Chloe’s situation. She’s at odds with her mom over the presence of her jerky new boyfriend, David. She hates school and finds comfort in drugs. Life is Strange addressed these benchmarks already, making the first half feels like a chore to get through. Her father’s death acts as a big recurring theme that was in danger of being run into the ground. That could still happen, but this episode eases up just before reaching that point,. The tragic event facilitates some effective dream sequences that show just how much deeply it affects Chloe’s psyche, making it almost impossible not to feel for the girl.

Chloe’s painful longing for her friend Max offers another strong source of sympathy.  Life is Strange touched on Chloe’s disappointment and resentment towards Max’s radio silence during their separation. Before, I felt she was being somewhat unfair. After scrolling though Chloe’s unanswered text messages to Max on her phone, as well as her journal addressed to Max in a sad form of coping, I’m leaning towards taking her side on that situation. It sucks to have your supposed best friend not only move away, but seemingly not care much about keeping in contact. That’s where I felt my strongest connection to Chloe as a person, despite this stuff existing mostly in the background.

The story steps up once Rachel Amber mysteriously saunters onto the scene. After hearing so much of Rachel’s legend in the first game, I looked forward to meeting her in person. Rachel’s daring, confident, and earnest; I could see why Chloe became so infatuated with her. Being a prequel story, knowing the unfortunate fate that awaits Rachel creates a powerful sense of dread to watching this captivating and tender relationship unfold.

The girls’ friendship quickly blossoms, likely because this series only has three episodes to tell its story. Awake does a good job of establishing Chloe’s desperation for love and acceptance throughout the episode. That, coupled with a sad revelation that puts them an emotional common ground, made it easier to buy Chloe and Rachel’s journey from strangers to best buds in just half an episode. A dramatic series of events towards the end tug hard at the heartstrings. Specifically, these moments connected me with Chloe on a deeper level, causing my early feelings towards her to do a complete 180. Combine that with the eye-brow raising conclusion, and the second half effectively rescued this episode and got me hooked on playing next installment.

How Does It Look?

Before the Storm looks a teeny bit sharper than the first game, but the artstyle is identical. Some stiff animations (especially from nameless NPC’s) give the game an animatronic vibe at times. Particularly, Chloe’s goofy “hold up arm to read scribbled writing on hand” animation got quite a few, unintended, chuckles for how robotic it looks.

How Does It Sound?

Does Rhianna DeVries successfully fill Ashly Burch’s shoes as Chloe? I believe so. I wouldn’t say the difference isn’t noticeable, and I would still prefer to have Burch in the role, but DeVries gives a more than respectable performance in her own right. The soundtrack was one of Life is Strange’s main selling points; the same can be said about Before the Storm. When I didn’t find myself subconsciously banging my head to fictional band Firewalk, I was zoning out to the mellow jams on Chloe’s mp3 player. 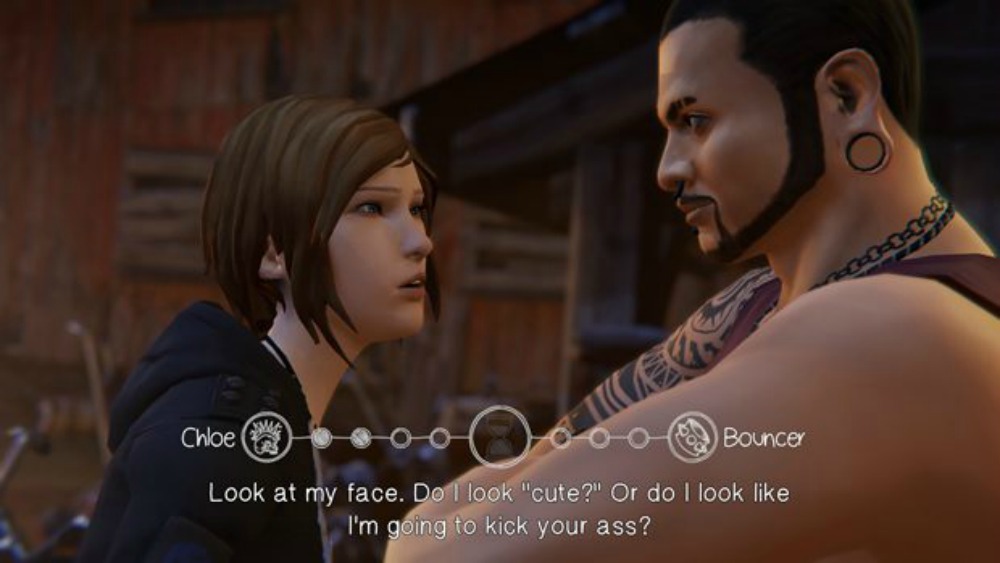 How Fun Is It?

Before the Storm swaps time manipulation for a simple yet kind of lame Backtalk dialogue system as its showpiece mechanic. Designed sort of like a verbal tug-of-war, Chloe engages in verbal confrontations where players must assemble a “correct” series of responses from a dialogue tree in order to bend others to your will.

Even with hints like “Bullies require an aggressive response” I never felt like I could confidently achieve the desired results, making my victories feel more like flukes. Some of that had to do with me picking a perceived “nice” answer and Chloe delivering the line with heaping spoonfuls of venom. Other times, the options only consisted of ostensibly mean retorts, which left me unsure of how to proceed when I sought the least negative outcome. Backtalks can be tense and unpredictable, much like real-life conversations to be fair, but I wish it felt less like a glorified guessing game. The fact that I’m thankful there weren’t many of these sequences in Awake does not bode well for its future.

I’m happy (and relieved) to report that gameplay features no equivalent of the infamous “find x-amount of bottles” mission from the first game. Awake doesn’t feature any complicated or involved activities in general.  An optional Dungeons & Dragons-style tabletop game that made fun use of the dialogue system with Blackwells’ resident nerds stood out as my favorite diversion . Beyond basic “get a thing to do a thing” quests, you’ll spend most of your time inspecting every point of interest for Chloe’s input. Seeking out spots to spray graffiti replaces the first game’s photo ops as the batch of collectibles. Chloe’s wit doesn’t always land, but she paints a few smile-worthy zingers; writing “definitely, absolutely not a meth lab” on the side of a trailer comes to mind.

One big issue, which may affect the series as a whole, is that decisions revolving around the returning characters lacks a lot of meaning. Sure, I may piss someone off in the short term, but I know everyone’s starting places at the beginning of Life is Strange. Should I really care about my behavior towards mom or David if I know exactly how Chloe winds up treating them regardless in the future? I became invested in my decisions in the first game because I had no idea what the consequences where. With Before the Storm, I know exactly what will come to pass in the long term, diminishing my interest in actual choice-making. Interacting with Rachel Amber is the only exception to this. As the episode’s only true wild card, navigating our relationship, friendly or romantic, kept my attention and enthusiasm.

Awake’s flat opening chapters kicks it off on a cold note, but once Rachel Amber swoops in to save the day, the story becomes exponentially more intriguing. Chloe and Rachel’s budding friendship comes packed with genuine smiles and heartache; you might even shed a tear or two. Unfortunately, some dull narrative retreads must be endured first. Other than that, this is Life is Strange with minimal differences. I’m not sold on the Backtalk system at this point and would even prefer it didn’t exist. Overall, Awake’s final chapter alone managed to get its hooks into me and may be worth experiencing alone for Life is Strange fans.

2 thoughts on “Review: Life Is Strange: Before The Storm Episode 1 – Awake”