I love professional wrestling. On my list of “Best Things Ever”, sweaty man drama ranks second only to video games. As such, wrestling video games have always been a no-brainer (though mediocre releases have dampened that interest in recent years.)

When the mash-up of my two biggest loves aren’t enough of a sell, the commercials for these games tend to send me over the edge. Maybe the novelty of seeing my favorite sports entertainers on TV outside of WWE’s confines gets me pumped. Or perhaps it’s the hilariously campy or badass tone many of these advertisements run with. Whatever the reason, I’ve put together a list of wrestling video game commercials that entertain as much as they inspire a purchase.

Mario talks about professional wrestling. Let that sink in. One of Mario’s biggest speaking roles outside of the Super Show sees him providing mini play-by-play of Hulk Hogan versus Randy Savage in WWF Wrestlemania Challenge for the NES. As a massive fan of both properties, this commercial is both surreal and amazing.

16 MEGS OF MAYHEM! IN THE RING, OUT OF THE RING, OUT OF CONTROL! I can barely process this commercial’s rapid pitch of 101 reasons why Royal Rumble for SNES is awesome. But I’m strangely compelled to buy it now, decades later. Plus Mr. Perfect graces this ad which raises its stock significantly.

Cooler Than The Era It’s Set In – WWF Raw

1994 WWF was highlighted by bright, cartoony characters and cheesy storylines. That year’s Raw video game took a decidedly different tone. Dark and stylish, it sold the game as being not only fun but flat-out cool. Even the random flashes of dogs, a vulture, and hanging raw meat (just go with it) worked in a weird 90’s way. You could argue the ad was something of a precursor to the atmosphere that would define the Attitude Era years later. 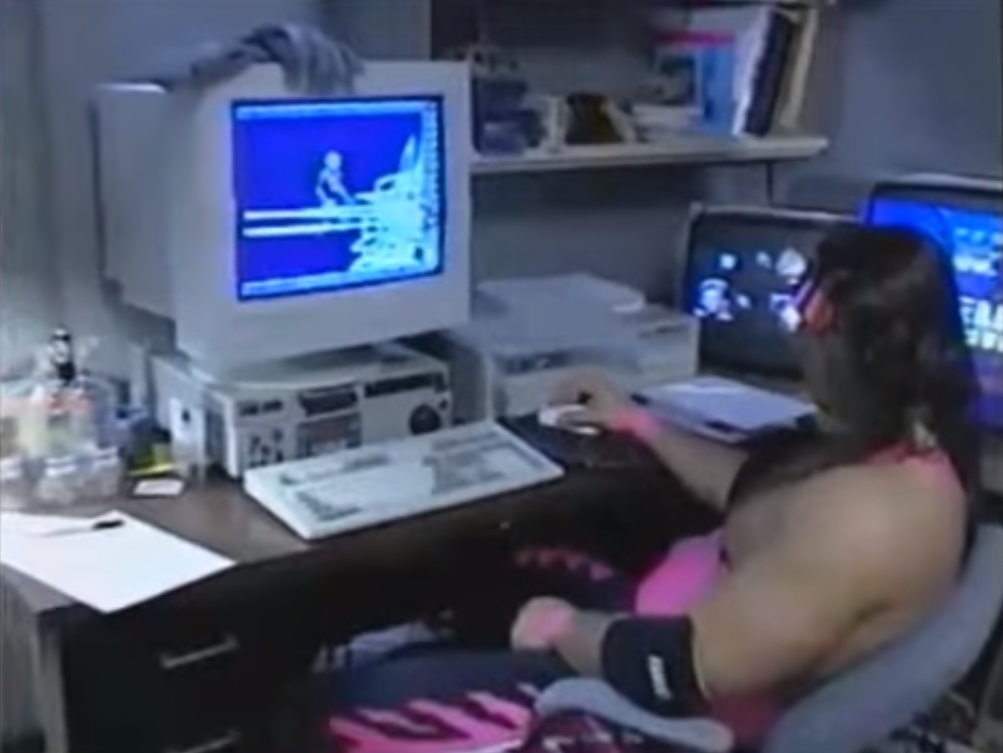 Midway’s Wrestlemania: The Arcade Game was a video game staple for mid-90’s WWF fans. Utilizing the digitized actor technology that brought Mortal Kombat to life, superstars like Shawn Michaels and Yokozuna looked and performed authentically (ignore the game’s zany supermoves). But who’s responsible for such accuracy? According to the delightfully campy behind-the-scenes ad for the game, we can thank Bret “The Hitman” Hart for doing much of the development’s heavy lifting. Listening to the Excellence of Execution discuss programming null pointers alone makes this worth watching.

In the WWF vs WCW wrestling war, my allegiance stood firmly in Vince McMahon’s camp. That didn’t mean I didn’t enjoy a good WCW video game (the N64 games were fantastic) or commercial. This hilarious ad for the PS1’s WCW Mayhem killed me the first time I saw it thanks to one incredible moment. You’ll know it when you see it, trust me.

If The Great One Says So – WWF Smackdown! 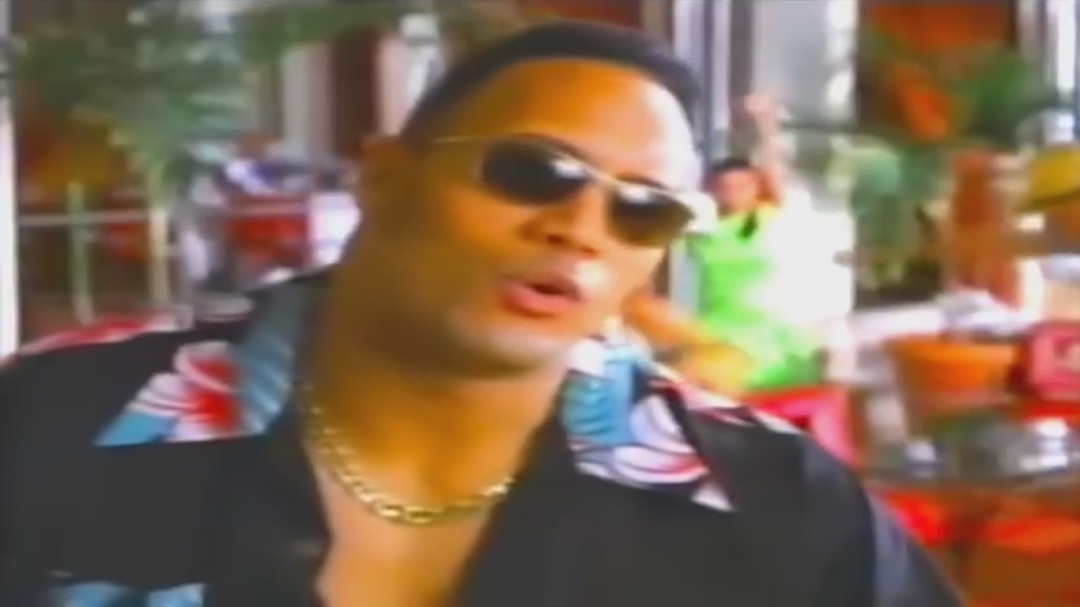 The first Smackdown game kicked my wrestling game obsession into high gear, and this beloved commercial played a big part in me getting it. I adored The Rock during the late 90’s Attitude Era, so an entire advert starring him and themed around his plethora of catchphrases hooked me immediately. Since I still believed wrestling was 100% real in 2000, I remember desperately wanting to know how WWF convinced the monster Kane to take part in filming this.

The Doctor Is In – WWE Day Of Reckoning 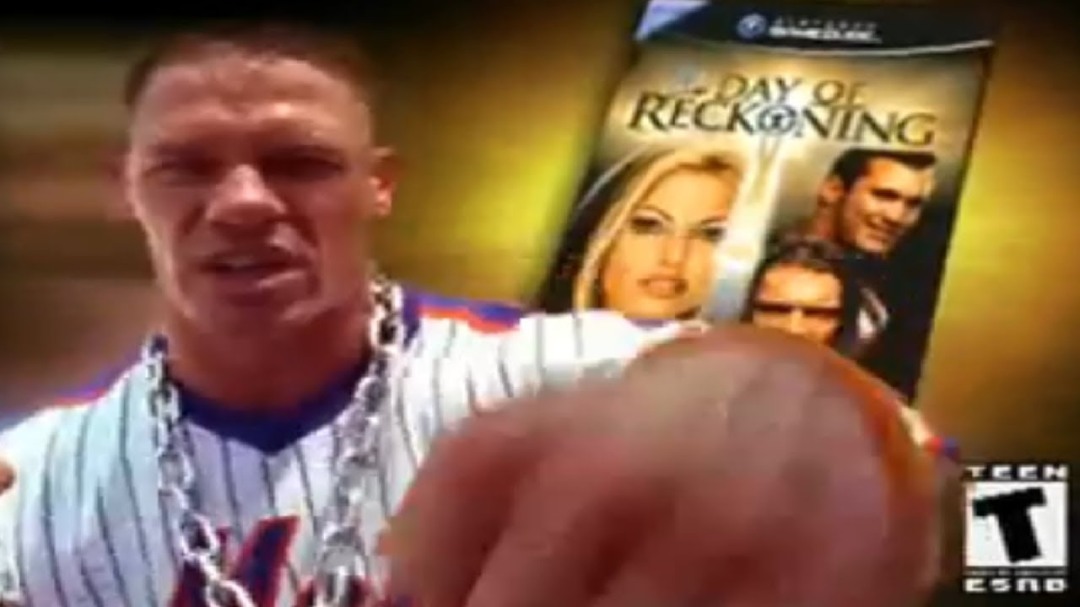 If you know John Cena today and weren’t a WWE fan during the early/mid 2000’s, you may be surprised to learn that the 16-time champ rose to the top via a ridiculous (but awesome) rapper gimmick. One reason the character worked: Cena can actually rap. WWE Day of Reckoning for GameCube put the Doctor of Thuganomics’ skills to great use with a slick rap track convincing all of us to fork over the dough for Nintendo’s hot new grappler.

Strap in because we’re in the 2K era now. For decades, Sting had the distinction of being arguably the biggest name in wrestling to never work for Vince McMahon. That changed when the WCW legend signed with WWE in 2014, earning himself a spot in WWE 2K15 and a fitting trailer to boot. Besides being a super cool (and somewhat creepy) commercial, it has historical significance as well. When it first aired on Monday Night Raw, it marked Sting’s first appearance on live WWE television that wasn’t some type of archival footage. How could it not make the list?

Speaking of bonus characters with sweet ads. When Arnold Schwarzenegger, specifically the Terminator version of him, was announced as a playable wrestler in WWE 2K16, the wrestling and video game worlds collectively crapped themselves. What better way to advertise his inclusion than to remake Terminator 2’s opening bar scene with the WWE roster? T2 is an all-time favorite of mine, so combining it with wrestling made this advert the realization of a fantasy I didn’t know I wanted.

If you haven’t noticed by now, 2K is much better at making wrestling video game commercials than actual wrestling video games. So what would Brock Lesnar’s Suplex City be like if it was a real place? Evidently, a crime-ridden cesspool filled with clever WWE motifs (peep the spinarooni ferris wheel). Besides the catchy-as-hell “Downtown” song that plays throughout,  pointing out all of the little touches and references to superstars past and present makes WWE 2K17’s imaginative commercial genuinely fun to watch.

Lastly, we have this year’s game which, by most accounts, isn’t all that great (shocking, I know). But damn it if it doesn’t have a trifecta of sweet ads. The campaign kicked off with a certain Kingslayer breaking into WWE’s archives and destroying every artifact he sees. After trashing priceless treasures such as Ric Flair’s robe collection and decapitating the statue of Andre the Giant, he finishes things off in explosive fashion.

The follow-up commercial takes place in the aftermath. As police investigate the scene, another hooded man forces his way into the area to survey the damage himself. He comes across a pair of familiar red, white, and blue boots; he looks up to reveal himself as a PO’ed and determined looking Kurt Angle. Not only are both ads wonderfully shot, but carry a surprising amount of emotion. No diehard fan wants to see their childhood unceremoniously tarnished, and Kurt’s furious reaction actually made me want to see him kick Seth’s ass.

The final ad goes a different route. A slick montage of the current roster is set to a pulse pounding beat and the lyrical styling of WWE Hall of Famer (yes, really) Snoop Dogg. Besides the rap itself being catchy and clever, it’s a wonderful showcase of this generation’s superstars. Check out all three ads below.