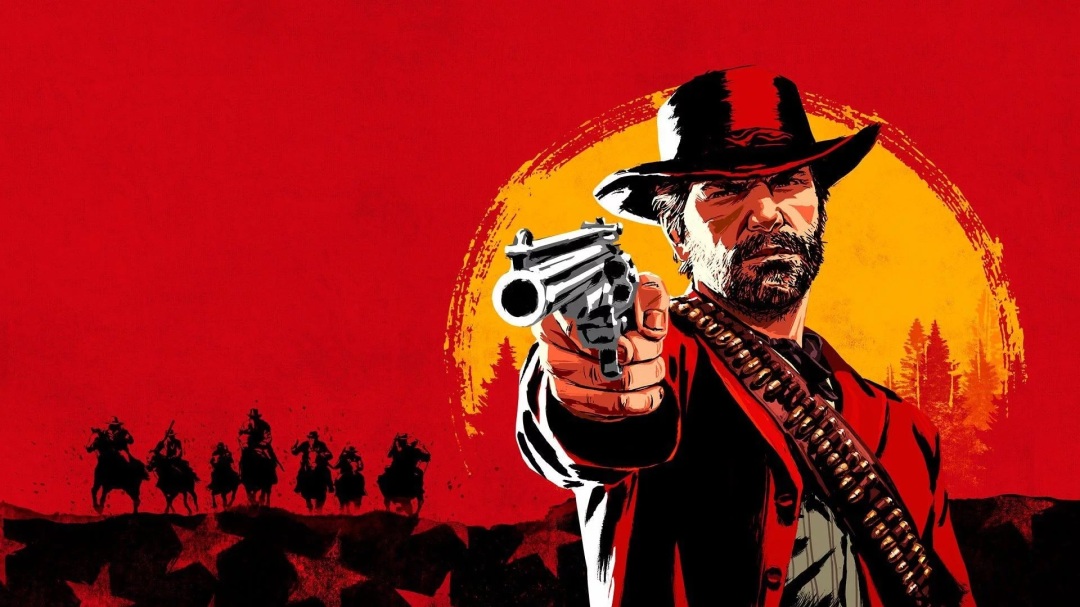 Happy New Year, all! 2018 is in the books, meaning it’s time for me to gush about the 10 games that made my soul smile the most last year. Locking my top 5 was relatively easy compared to other years as there were a special batch of games head and shoulders above everything else for me.  The real Sophie’s Choices came in determining the second half. After enjoying so many quality games,  I’m satisfied with my decisions, and I love to read what games you loved in the comments.

Where do I even begin? Let’s start with Arthur Morgan, a character I didn’t expect to hold a candle to previous lead John Marston. He now stands as one of my favorite protagonists ever. His arc from fatalistic, stone cold outlaw to a more enlightened, morally conflicted character is phenomenal. Cliche as it may sound, Arthur feels like a genuine person, and I loved role-playing as him. I can’t remember the last character I felt such a strong personal investment in, to the point that I still think about his journey today.

I initially worried that having to return to camp to maintain the gang would be an annoying tether to my open-world fun. As I got to know my fellow outlaws, I not only looked forward to seeing them but would take time just moseying around camp. They’re all great characters (save for maybe Micah). I loved sitting around a campfire and listening to Hosea or Pearson share stories. Lugging home a big kill for dinner and hearing my companion’s excitement filled me with pride. Add in the gang’s individual stories and interpersonal drama, and I think this might be the most well-realized party ever. This also makes their eventual splintering heartbreaking to watch. 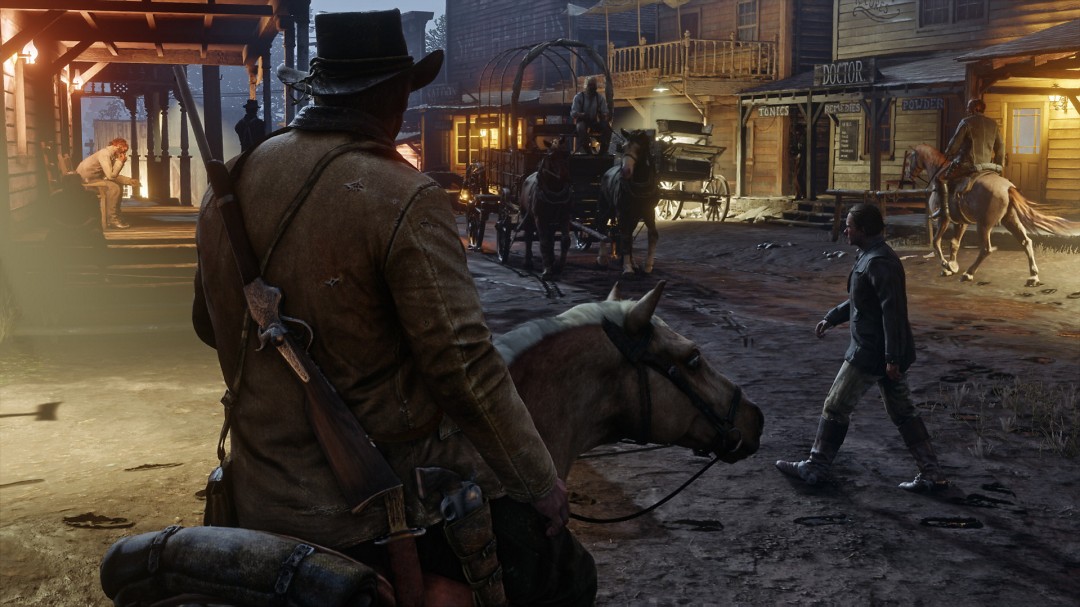 Red Dead 2’s world never ceases to amaze. The unreal attention to detail, from the realistic weather to the vibrancy of wildlife, is second-to-none. Just as in the first game, encountering the myriad of strangers often leads to unpredictable moments. Traveling may take a while, but I usually didn’t mind the miles of horse riding because I always stumbled upon a curious location or colorful personality.

As incredible as the story is, it certainly doesn’t hit consistently (the heck was with Guarma?). The gameplay’s methodical pace won’t be for everyone. In fact, it took me a few hours before I knew if I even liked the game or not. However, once the tutorials were done and I gave myself over to what the experience was aiming for, “slow” acts like skinning animals felt more rewarding than tedious. Those setbacks feel relatively minor compared to how flat-out captivating and immersive the rest of the game is. Just a year after The Legend of Zelda: Breath of the Wild’s Hyrule floored me, Rockstar sets another standard in open-world immersion. 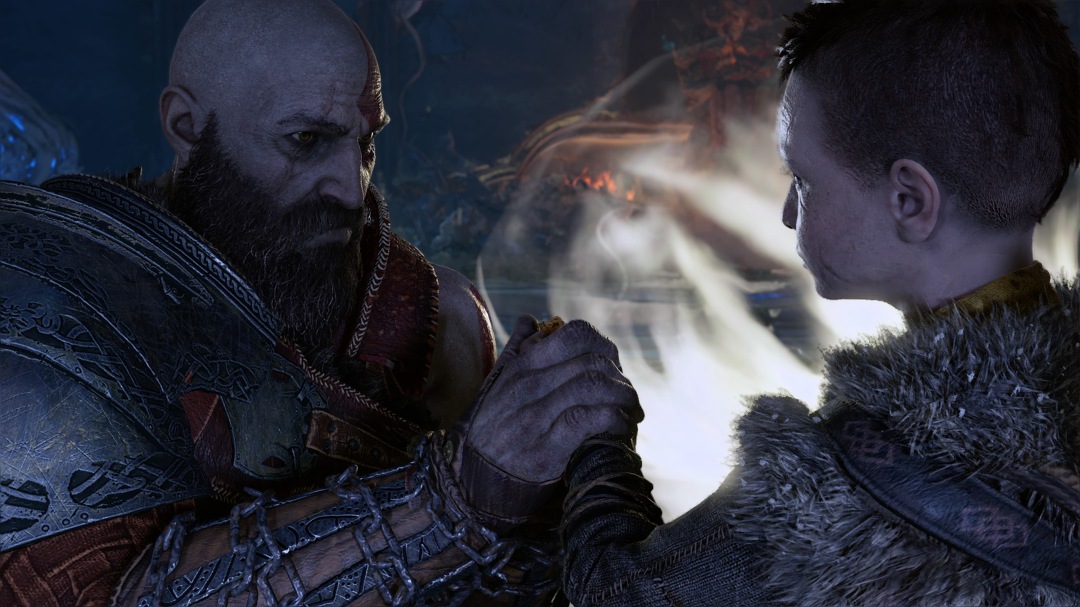 This is more like 1-B to Red Dead’s 1-A. My tepid reaction to 2013’s God of War: Ascension showed me that, as much as I adored the series, its once winning formula couldn’t continue without some big changes. That said, even I wasn’t prepared for shake-ups this dramatic–and less so for how fantastic they are. The switch to more intimate perspective gives combat a brutal new flavor while retaining the flair of the original style. Simply throwing and recalling the ax ranks as one of my favorite actions of the year due to how satisfying it feels. Atreus acts as a fun and, more importantly, useful sidekick in battle who only gets better as his skills grow.

The switch to a Metroid-ish open world works and boasts wonderfully clever methods of revealing itself. Speaking of the surroundings, my goodness is God of War a feast for the eyes. I loved exploring the beautiful and distinct realms. I stared in awe at creatures like the witch’s giant turtle and especially the world serpent. As far as story goes, Kratos’ character growth from pure rage with muscles to something emotionally deeper is well done. He’s backed by a stellar supporting cast–especially 2018’s favorite talking severed head, Mimir. I’m not sure what impressed me more: Santa Monica’s boldness to reinvent an established blueprint to this degree or to deliver on it and then some.

I love a good, tight platformer and Celeste delivers that alongside a surprisingly thoughtful story. A young woman named Madeline feels compelled to scale Celeste Mountain for reasons even she isn’t entirely clear on. During her climb she’s forced to, quite literally, confront the darkness within herself, battling inner demons such as anxiety and depression. The story hit me due to how it nails that awful feeling of fighting your darkness. Celeste offers yet another great cast of characters and an uplifting chiptune soundtrack bolsters the adventure. Platforming feels awesome, and the deviously designed stages offer plenty of variety and challenge while also being completely fair. Celeste stacks as 2018’s best platformer and, for me, among the generation’s best takes on the genre. 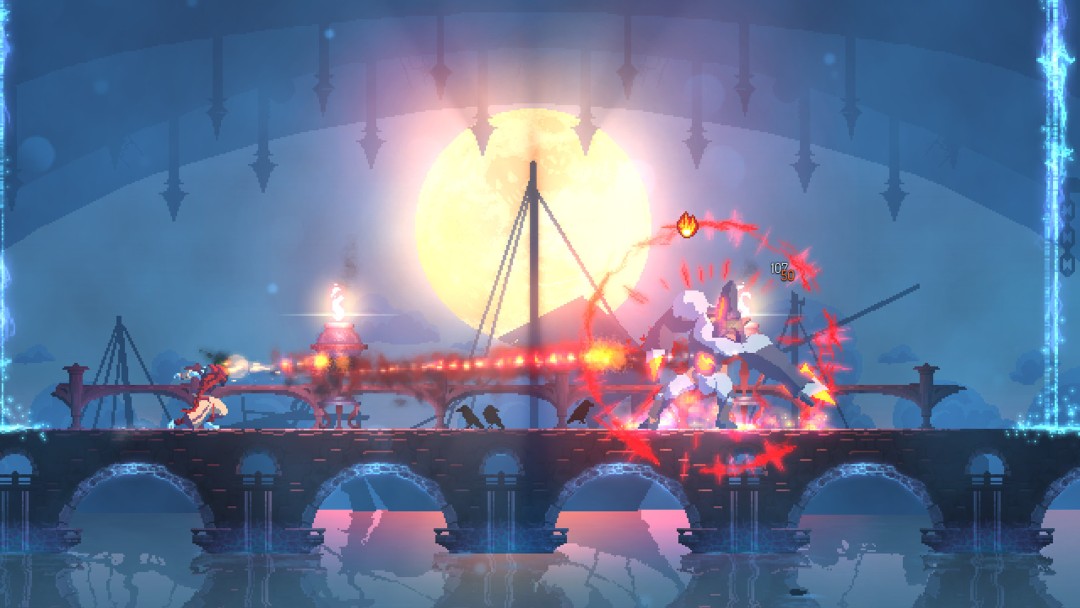 Dead Cells combines run-based design with possibly the slickest 2D combat controls I’ve ever played. I seriously struggle to think of a side-scrolling action game that feels tighter. The myriad of weapons and equipment are a blast to use. There’s no wrong answer in terms of loadout, a freedom that allows for fun experimentation (shoutout to my life-saver, the Sub-Zero-style freeze blast). An addictive sense of progress comes in discovering new item blueprints or gaining a new traversal ability that expands exploration options. Even after the suffering a crushing defeat or failing to unlock anything meaningful, the game is too exciting to put down for long. Finally conquering Dead Cells ranks as one of my greatest highlights for the year.

Insomniac’s take on my favorite superhero delivered everything I wanted from a Spider-Man game: an original, captivating story combined with the traversal of Spider-Man 2. Swinging around the beautifully rendered Big Apple feels incredible. It makes even the most repetitive crime mission enjoyable simply for how fun it is to reach them. The narrative packs genuine heart thanks to the fantastic performances. Spider-Man’s writing manages to take characters I’ve known inside and out for over 25 years and made me fall in love them all over again. 2018 was a hell of a year for the web-slinger thanks in big part to this near masterpiece of a superhero epic. 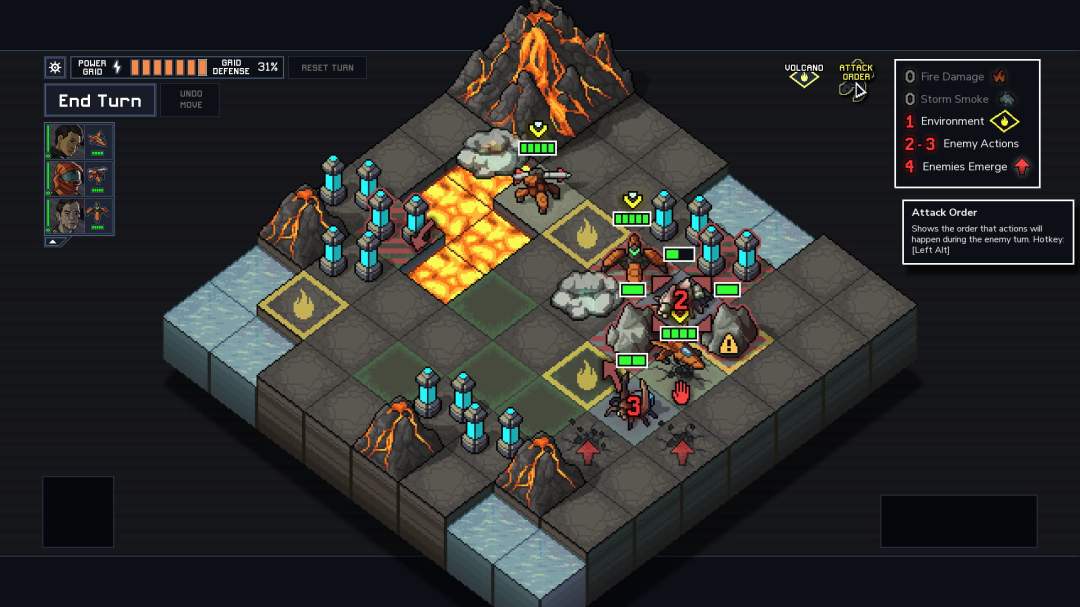 By combining turn-based strategy with puzzle game-like design, Into the Breach takes two of my favorite elements and blends them into an exciting whole. Players control a squad of mechs from the future who have been sent back in time to prevent Earth from being overrun by giant alien bugs. The catch is that enemies telegraph their actions in advance. This means players spend turns either trying to prevent the opponent’s moves or manipulating them to their advantage. Executing a perfectly planned sequence of maneuvers makes me feel like a genius. I gladly spend long periods staring at the screen plotting every possible move. Into the Breach’s inventive take on strategy rarely gets old, and I’m still fighting to unlock all of the mech squads long after I reached the credits.

This early surprise stuck with me throughout the year. The surprisingly mature story, which tackles the dangers of theocracy and blind religious zeal, engrossed me more than I expected. Iconoclasts also boasts inventive action and platforming mechanics, a novel party feature, as well as creative boss encounters. Retro-inspired Metroidvanias ran rampant in 2018, but Iconoclasts feels far more original than derivative. After spending the year singing this its praises, I’m happy to include Robin and the gang in my top 10. Now for the last time, go play this game.

Florence only takes about a half hour or so to finish, but its brevity didn’t make it any less impactful. This charming mobile title centers on a young woman’s relationship with a cool dude from its happy beginnings to a bittersweet end. The simple story hits home several times due to its wonderful earnestness. This definitely isn’t a fairy tale. The brilliant manner in which the game translates real moments, like an awkward conversation, into game mechanics also impressed the hell out of me. Furthermore, its soundtrack is low-key one of 2018’s best. Florence’s relatable subject matter and wide availability makes it an easy to recommend experience that’s well worth sitting down with.

Prior to this game’s release I hadn’t watched Dragon Ball media since GT disappointed me way back in middle-school. This game was so shockingly good that it single-handedly got me back into the franchise (I’ve caught up with Dragon Ball Super’s English dub). Arc System Works fighters like Guilty Gear and BlazBlue have been enjoyable but a bit too technical for me. FighterZ feels more approachable while still retaining that depth. It’s a well-crafted, and insane, tag team fighter that succeeds where Marvel vs Capcom: Infinite dropped the ball. The spot-on presentation and nerdy attention to detail makes this the Dragon Ball game I pined for all those years ago. Never in a million years did I think I’d ever see Goku in my top 10.

So take the previous entry’s last sentence and replace “Goku” with “non-Mario Kart driving game”. I sat in attendance at Microsoft’s E3 briefing during Forza Horizon 4’s presentation and barely paid attention as autumn leaves rained around me. I couldn’t care less about cars or car culture, so the series never seriously interested me. Still, I decided to give it a shot, mainly because I’m a Game Pass subscriber. Doing so not only validated my membership (woo!), but turned me into a fan.

The changing seasons actually matter beyond a presentation shift, making tracks feel different when they’re frozen in ice or drenched with rain. Activities offer solid variety, and the game has just enough silliness, corny as much of it is, to not bore me. Despite putting in dozens of hours I’m still an idiot when it comes to cars. That’s fine, because Forza Horizon 4 works as one of my go-to titles for putting on a podcast and banging out a few fun races while admiring the stunning vistas.

That does it for this year! As usual, here’s a list of every game I completed in 2018:

For the first time, here’s a list of other games I played but didn’t finish before the end of the year for one reason or another.